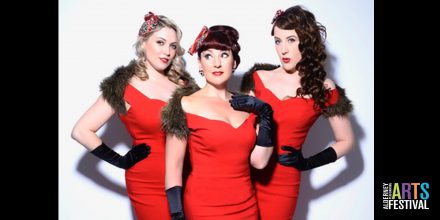 Combining stunning close harmony vocals with bespoke big band arrangements, cute choreography and top to toe pin up couture, these sassy songstresses serve up a perfectly nostalgic mix of toe-tapping tunes from swing-time songbirds and red hot rockabilly groups, right through to modern day pop which they beat into submission with their retro sticks!

Founded in 2009 by singer and actress Sarah Lindsey, The Rockabellas quickly became a firm favourite with high-end corporate and commercial brands including Bentley, Mercedes-Benz, Tiffanys, Twitter, British Airways, Neff, Cath Kidston and Nespresso, performing at a host of renowned banqueting suites and top hotels including The Savoy, The Ritz, The Grosvenor, The Hilton and The Dorchester to name but a few. With regular shows at famous retro joints The Pigalle (now Electric Cafe), Troxy and Café De Paris, The Rockabellas are also highly regarded on the vintage cabaret circuit and were awarded at The National Vintage Awards in the Best Vintage Style Musical Performer Category in 2012. They are regular features, both on stage and in the press, at major sporting events such as Epsom Ladies Day, Royal Ascot and The Grand National and have performed at Wembley for the 2012 FA Cup Final and Allianz Park for The Saracens Season Open Launch 2013.

The Rockabellas were the first repeated act in the 20 year history of the ‘Battle Proms’ picnic proms concerts, where for five consecutive years they performed to thousands of people a week at stunning stately home locations such as Blenheim Palace and Highclere Castle, home of Downton Abbey. To date, their largest audience was at the official Queen’s Diamond Jubilee Family Festival in Hyde Park where they thrilled over 100,000 people with their bespoke Jubilee dresses and Union Jack pill box hats, closely followed by their thrilling performance to 7,000 singers at Birmingham’s NEC for the 10th anniversary of national phenomenon Rock Choir.

With a jingle campaign for mobile phone giant Orange, Television features alongside Frank Skinner and Suzi Klein (‘What Performance’ BBC4) and for Tim Minchin, Dawn French, Ruth Jones and Michael Sheen (‘Ruth Jones Easter Treat’ BBC4), a live performance for Jonathan Ross on his Radio 2 Arts Show, theatre billings throughout the UK with their own sell-out shows Sirens of Swing and As Time Goes By, plus foreign engagements in Europe, Asia and America, The Rockabellas have certainly been there, done that and worn the pencil skirt!

“We are delighted to be returning to the Alderney Arts Festival for the first time since our 2013 performance. Indeed, it’s our first performance anywhere since the global pandemic so it’s very special to us in more ways than one and we can’t wait to get you all In The Mood!”

“That was fantastic, you sounded amazing!”