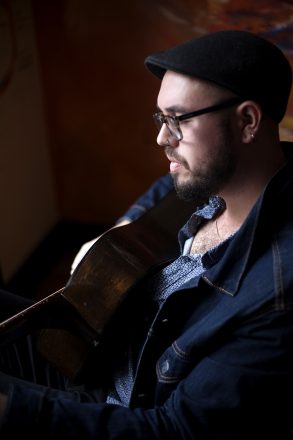 Dirty rhythm and blues from the depths of Alderney, based in London. Island born Robert J. Hunter combines his gruff and powerful voice with the wild thud of overdriven blues guitar to create his truly unique original music.

His powerful debut album, ’Songs for the Weary’, received blues chart success and critical acclaim and the single release, ‘Demons’, reached number one in the UK iTunes Blues Chart.

‘Before the Dawn’, a full band album, followed on 27th November 2015 showing that Robert had matured and developed as a singer, songwriter and instrumentalist.

His new album, which is this time a solo release, demonstrates not only the versatility of Robert’s musical ability but also the diversity in his songwriting. ‘Where I’m From’, released on 5th December 2016 exhibits eight tracks of dirty blues, country and folk; it’s already recieving rave reviews.

Robert has previously supported acts including Wilko Johnson, The Animals, Eddie & the Hotrods and HeyMoonShaker, giving him experience in different genres. He has played many top venues around the country including Ronnie Scotts Jazz Club and The Spiritual Caiprihina Bar in London. He is a regular performer at the London blues jams and clubs as well as peforming in Europe and on the UK festival circuit.

Robert J. Hunter deserves to be heard and his energetic live show is not to be missed.