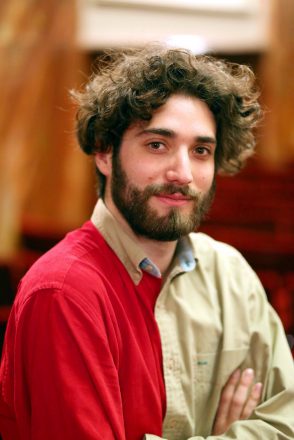 Born in the UK, Michael Matthews’ flamboyant and expressive performances are placing him at the forefront of the young generation. He has been praised for a rigorous technique alongside his natural musical perception by leading figures in the field. His concerts are communicative, eccentric and have been described as truly beautiful and professional. He brings a new identity to traditional repertoire as well as verve and dynamism to contemporary and lesser-known works.

Since his youth, Michael has studied with distinguished and unorthodox teacher and performer Rob Johns, completing his First Class Honours Degree in 2016. He has subsequently performed in recitals, masterclasses and competitions across the country and abroad. Recently, he has given solo recitals with an emphasis on the Renaissance and its links to contemporary music. In the spring of 2017, Michael gave his debut performance of Joaquin Rodrigo’s Concerto de Aranjuez and performed Fantasia para un Gentilhombre in 2019. He continues to study in the UK with Rob Johns and with Paolo Pegoraro at the Segovia Guitar Academy in Pordenone, Italy.

In 2018 Michael was chosen by the Tillett Trust to give recitals across the UK during the 2018/2019 season. He was also selected by the Concordia Foundation to perform in outreach projects and recitals in central London and abroad. In 2019 Michael was awarded the Sir John Manduell Prize at Bromsgrove International Musicians Competition for the best performance of a contemporary work. Recent engagements include recitals at Brighton Festival, St James’s Church Piccadilly and his debut appearance at the Wigmore Hall.