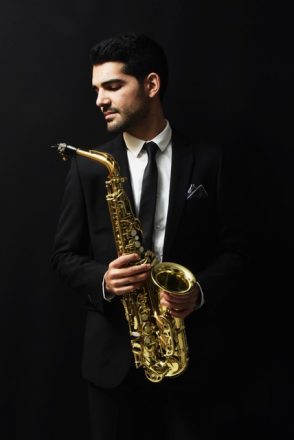 Manu Brazo is a young Spanish saxophonist who has established himself as one of his generations most versatile young musicians.  At ease on the stage he is often praised for his unique sound and virtuosity as well as having the ability to have a close and intimate relationship with his audience.

Over the last few years Manu has been a regular recitalist at british and international music festivals such as Leeds International Concert Season, Tetbury Music Festival, Newbury Spring Festival, Aegean Arts Festival in Crete and Risor Kammermussikkfest in Norway.  He has also given solo performances throughout the UK and Europe and played with the London City Orchestra, RCM Philharmonic, Orquesta Betica de Camara and Orquesta Filarmonia. In 2018 he was selected to take part in the Britten-Pears Young Artist Programme where he performed at the Snape Maltings Proms conducted by Marin Alsop.   Manu has also been a regular guest on BBC Radio 3 In Tune.

In the summer of 2019 Manu, accompanied by pianist Bryan Evans MBE, was invited by promoters Live Nation to be the opening act for Sir Cliff Richard at Greenwich Music Time Festival and to open ‘Downton Live’ at Highclere Castle to audiences of around 12,000 people.

Born in Seville, Manu started to play the saxophone at the age of 9. Having studied in Spain he was accepted at the Royal College of Music where he graduated from his Master in Performance and Artist Diploma with Distinction and won numerous awards.  As a young musician Manu has received support from Making Music (PDGYA), The Musicians Company, The Tillet Trust, Drake Calleja Trust, Concordia Foundation and Talent Unlimited.  Manu lives in London. 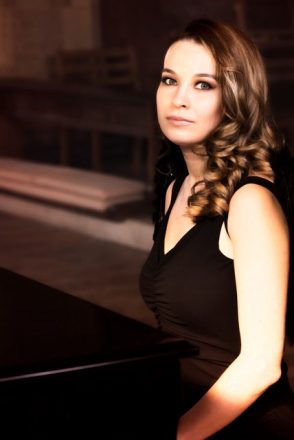 Born in Gdansk, Poland, into a family of musicians, Olivia gave her first public performance at the age of seven. Three years later she made her concerto debut, performing with the Polish Youth Orchestra.

Olivia studied in Moscow under legendary Lev Naumov, who was nicknamed the “Godfather of the Russian piano school”, at the Tchaikovsky Moscow State Conservatoire and graduated with honours in 2002. She was certified as a piano performer, piano teacher, accompanist and chamber ensemble artist. Two years later, in 2004, she completed her master’s degree in music.

Olivia is a winner of multiple piano competitions in Poland, Italy and Germany. She performed piano recitals and played as a soloist with symphony orchestras in Poland, Russia, Germany, France, Italy, UK, Hong Kong, China, Australia and the United States. She appeared with renowned conductors including Zygmunt Rychert, Tomasz Chmiel, Grzegorz Sutt, Ovidiu Balan, Mikhail Scherbakov and many others. Her live recordings have been broadcast by Polish, Russian and American TV and radio.

She was invited to participate in the International Piano Festivals “Musical Floralia – Music in Flowers” in Warsaw in 2004 and 2005.

Olivia combines a busy performing career with a passion for teaching. She was a professor at universities in China and in Hong Kong for several years, as well as at the Windsor Piano School in Windsor, Berkshire. In 2008, she gave masterclasses at the International Jakarta Music Festival in Jakarta, Indonesia.

In July 2016 she was a member of the Jury panel at the 2nd Windsor International Piano Competition.

Currently, Olivia lives in London and balances a career as a soloist, chamber musician and teacher. She is a founder and owner of the Creative Chords School of Music, an award winning music school in Surrey.