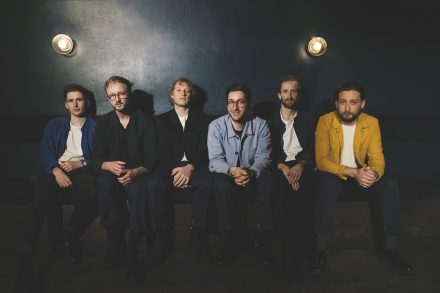 You’ll never hear Kansas Smitty’s House Band play the same show twice. Theirs is a joyful, spontaneous jazz rooted in swing and blues that keeps the shows fresh and the crowds faithful. They have a new record out in May 2020 on the !K7 imprint Ever records, showcasing a new direction for the band and a sound of their own.

They have recently been described by Jamie Cullum as ‘one of the hottest live acts on the UK jazz scene’ however the band originally began in 2014 as resident musicians of their own jazz bar, Kansas Smitty’s. As the bar grew, so too did the Band’s fame: residencies at Cheltenham Jazz Festival, three-time-sold-out headliners at London’s iconic Ronnie Scott’s, as well as the acclaimed release Broadway 2018 culminated in a nomination for UK Jazz Act of the Year in the Jazz FM Awards, and a win at the British Jazz Awards for ‘Best Small Group’ in 2018.

‘They dance to the beat of their own drum. Totally unpredictable!’ – Cerys Matthews/BBC Radio 6 Music